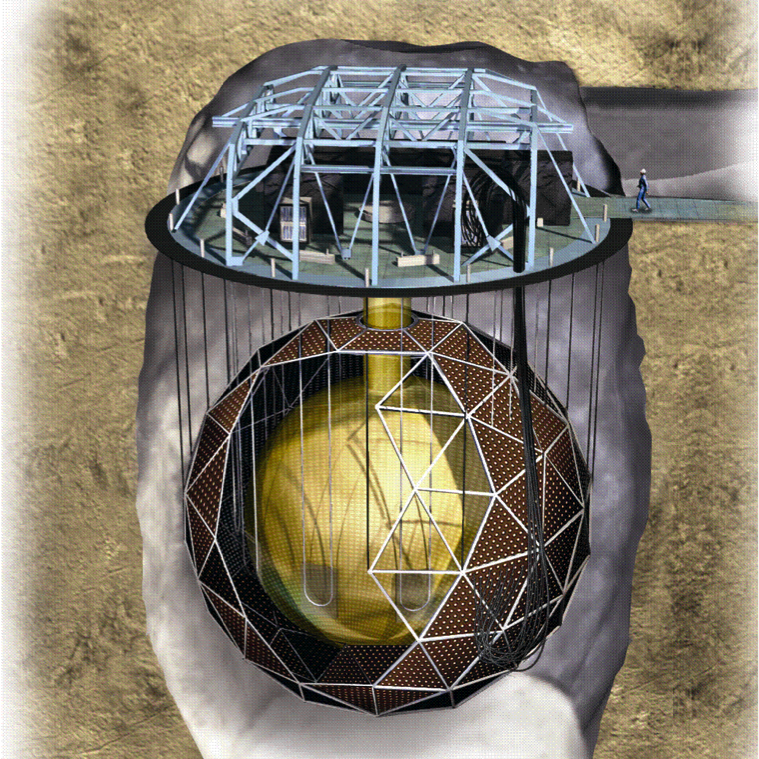 SNO+ is a kilo-tonne scale liquid scintillator neutrino detector. The experiment is located approximately 2km underground in VALE's Creighton mine near Sudbury, Ontario, Canada. The heart of the SNO+ detector is a 12m diameter acrylic sphere scheduled to be filled with approximately 800 tonnes of liquid scintillator in 2016. The acrylic vessel will be immersed in a water buffer, which functions as shielding from radiation in the surrounding rock. The scintillator volume will be monitored by about 10,000 photomultiplier tubes (PMTs), which are very sensitive light detectors. The acrylic sphere, PMTs and PMT support structure are being re-used from the SNO experiment. Therefore, SNO+ looks almost exactly the same as SNO (shown left) except that, in addition to the ropes that hold the acrylic vessel up, ropes have been added to hold the vessel down once it is filled with (buoyant) scintillator.

Liquid scintillator is an organic liquid that gives off light when charged particles pass through it. SNO+ will detect neutrinos when they interact with electrons in the detector to produce charged particles which, in turn, create light as they pass through the scintillator. The flash of light is then detected by the PMT array, and is converted into information such as energy and position of the particle. 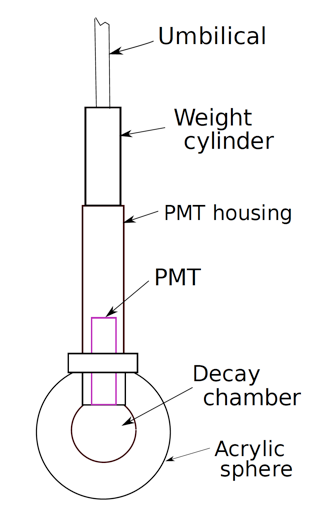 In order to characterize the more than 9500 SNO+ PMTs in-situ, several calibration sources are currently being designed and constructed. In Berkeley, R&D is underway to produce a Cherenkov light source. It will provide a well understood source of non-isotropic light for calibrating detector response independent of the light yield of the SNO+ LAB/PPO scintillator.

The decay chamber of the source is constructed out of two thick acrylic hemispheres. When a 8Li decay occurs inside the decay chamber, the beta enters the acrylic wall and produces Cherenkov light. The subsequent alphas from the 8Be decay produce scintillation light in the helium gas. This can be used to tag the event using a small PMT.

Several test setups in our lab are testing different choices of decay chamber lining, which will need to absorb and/or reflect the alpha scintillation photons. We are also investigating different methods of bonding the two acrylic spheres together in such a way that no leak occurs, even after significant stress is applied to the bond.

One of the crucial points in a neutrinoless double-beta decay experiment is the control of the backgrounds. There are many different sources of radioactive events that can occur allover the detector volume in the same energy range as the neutrinoless double-beta decay. Those events that happen outside the scintillator volume are the so-called external backgrounds. These backgrounds are highly suppressed by fiducialization, i.e. we can identify this kind of events by reconstructing its position and noticing that it is outside the isotope region. However, few of this events are misreconstructed as taking place inside the active volume and hence, mimicking a real signal event.

The largest background by several orders of magnitude is the radioactivity of the PMT glass due to the Uranium and Thorium decay chains. The PMTs are devices with a higher activity than the natural one and they need to be specially controlled in searches of rare events, as in the SNO+ case. Improvements in the reconstruction and other tagging techniques are being investigated to improve the veto power to this background. 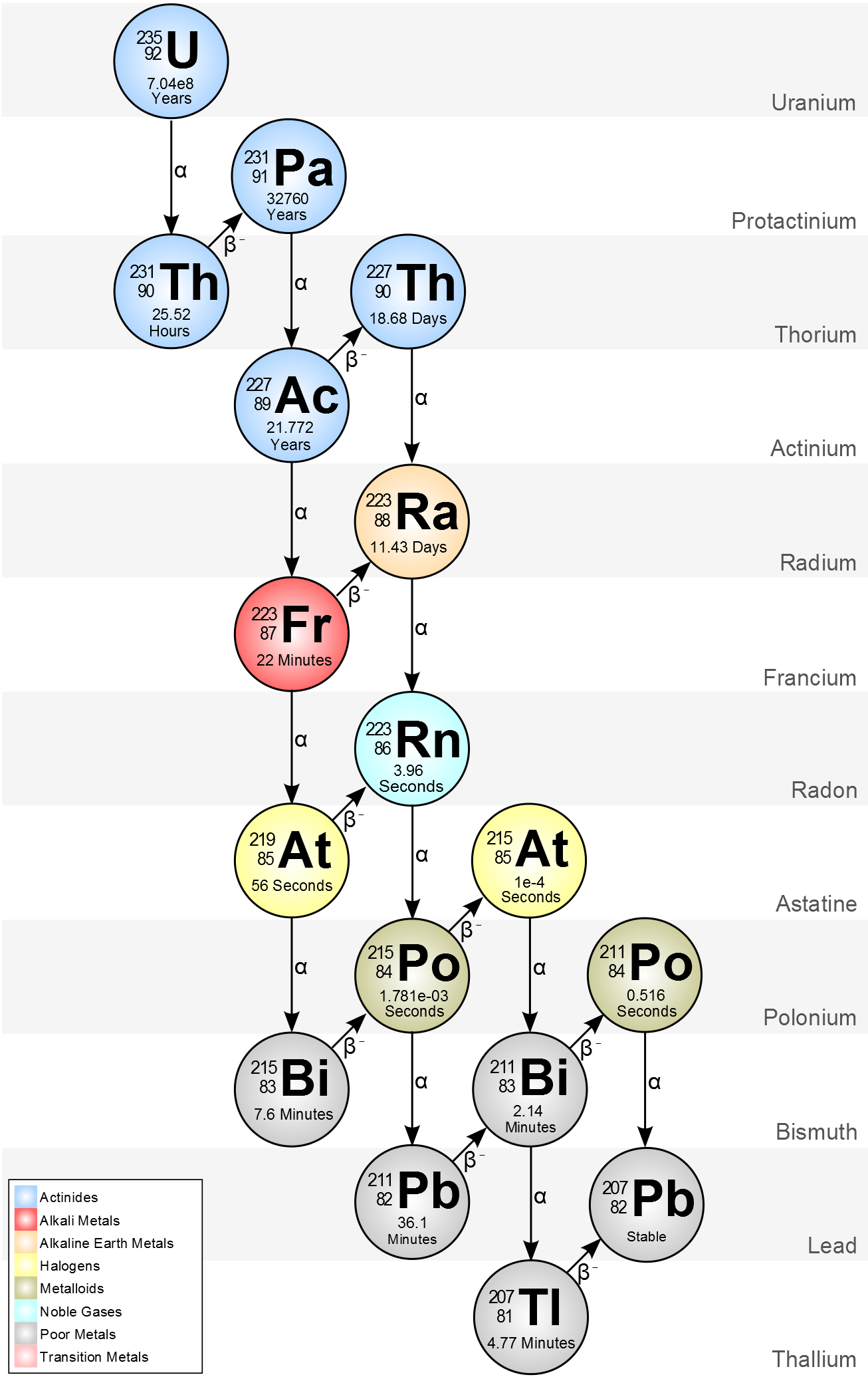 Since SNO+ aims to distinguish a neutrinoless double-beta decay peak from several backgrounds, calibration of the detector is extremely important. Berkeley is heavily involved in PMT calibrations of several types. For more information, see the PMT Calibrations poster or the Understanding the SNO+ Detector poster.

Each of the PMTs in SNO+ is surrounded by a cone of shiny petals called a concentrator (pictured left), designed to increase the light collection efficiency of the PMTs. During SNO, the concentrators were observed to degrade; their coating would flake off and patches of the concentrators would lose their ability to specularly reflect light. The collaboration kept track of a geometrical detector property called angular response, which is the number of photons that hit the PMT ("successful") divided by the number of photons that enter the concentrator envelope ("total") measured at each angle relative to normal incidence. That is, successful/total plotted from 0 to 90 degrees. With the aging of the concentrators, the angular response was found to decrease at high angles, meaning normal incidence photons were more likely to be "seen" than those entering the concentrator bucket at high angles. During SNO, a purely empirical formula was applied to account for the degradation, but SNO+ would like to model the effect. 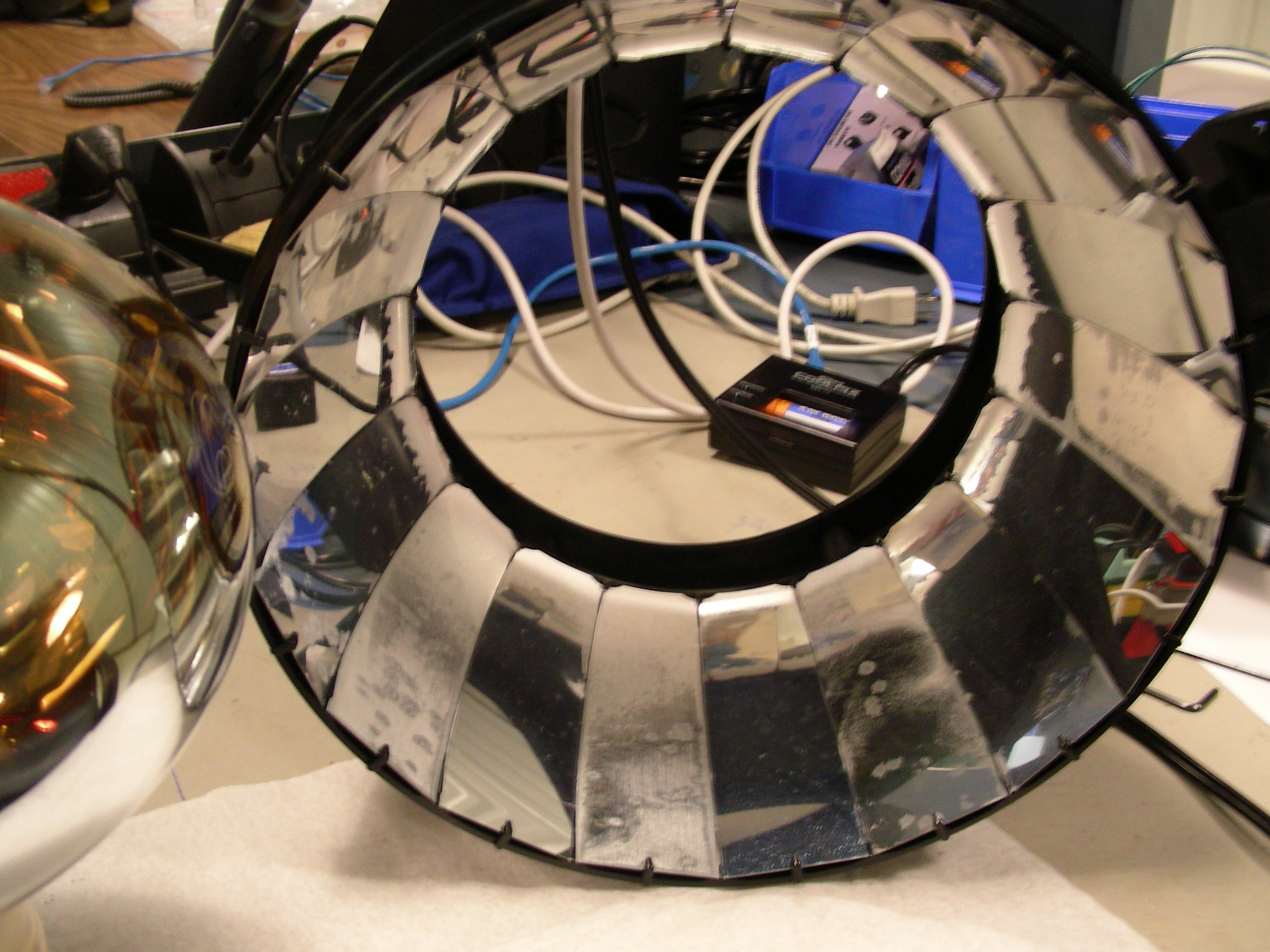 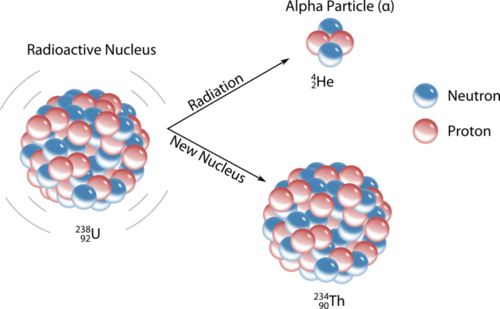 The Uranium and Thorium decay chains contain beta decay within the relevant energy for SNO+. These are mainly Bismuth isotopes that decay to Polonium and then to Lead, emitting an alpha particle after a characteristic time of few microseconds. The Bismuth background can be effectively reduced by tagging the alpha particle and rejecting events within the characteristic time. A good particle identification (PID) that distinguish alphas from betas (electrons) is important in order to improve the performance of this kind of veto.

One of the most important open questions in neutrino physics is the question of whether neutrinos are Majorana or Dirac particles. For Dirac particles, which include most familiar kind, particles are distinct from anti-particles (e.g. e+ and e-). For Majorana particles, particles and anti-particles are identical except for their helicities. Many theorists believe that neutrinos should be Majorana particles (and are the only known fermions that could be Majorana), as the theory of Majorana masses admits a mechanism that naturally explains the smallness of the neutrino mass.

Experimentally, the most interesting aspect of Majorana mass is that a Majorana particle can act as its own anti-particle. Attempts to detect the Majorana nature of neutrinos focus around the double-beta decay process:

where (A,Z) labels the nucleus by the mass number, A and proton number, Z. If the neutrino is Majorana, the anti-neutrino emitted by one of the neutrons can be absorbed as a neutrino by the other. The resulting process, in which no neutrinos are emitted, is neutrinoless double-beta decay:

Loading the double-beta decay isotope 130Te into the SNO+ liquid scintillator has the potential to make an extremely compelling contribution to the double-beta decay search. SNO+ is a large, well-understood, existing detector. It has the advantage of offering the potential for source in / source out calibrations, thus allowing a detailed understanding of background shapes and levels prior to introduction of the target isotope. The large size means significant self shielding, reducing backgrounds from radioactivity in regions of the detector external to the scintillator volume, as well as further background rejection via fiducialization. The use of a liquid target allows extensive purification and assays of the target volume. The time profile of scintillation light is very sensitive to particle type, allowing extremely high levels of separation of alpha and beta events and, thus, high confidence in-situ identification of events from radioactive contamination in the target volume. As a result, the predicted background levels in the region of interest in SNO+ are significantly lower than those in competing experiments. Finally, SNO+ has the advantage of being an easily scalable technique, with the potential to load significantly greater fractions of target isotope and thus increase sensitivity beyond the reach of concurrent experiments.

Or if your prefer your information in comic form, see SNO+ explained (from Andy Mastbaum)

SNO+ is also sensitive to solar neutrinos, geo-neutrinos, reactor neutrinos, and supernova neutrinos. You can read more about the the neutrinoless double-beta decay phase as well the other neutrino measurements on the collaboration home page, from which much of the above information was taken.