The CheSS experiment is a first step towards the future THEIA experiment. THEIA is a realization of the next generation of optical detectors built under three key concepts: high coverage, new generation of high quantum efficiency and fast photon detector (LAPPD) and water-based liquid scintillator (WBLS). By filling a detector with this unique medium, it will provide the advantages of having scintillation light in a water Cherenkov detector: higher light yield than only Cherenkov, low energy threshold as in a pure scintillation detector, longer attenuation length than a pure scintillation detector, directionality and a powered particle identification by combining Cherenkov and scintillation hypothesis for different particles.
An immediate clear advantage of this new technology is adding the directionality information in a scintillation detector. This is specially interesting in neutrino-less double beta decay experiment (LINK) like SNO+, where the main background is composed by the solar neutrino events and resolving the direction of these events would help to reduce events coming from the sun. 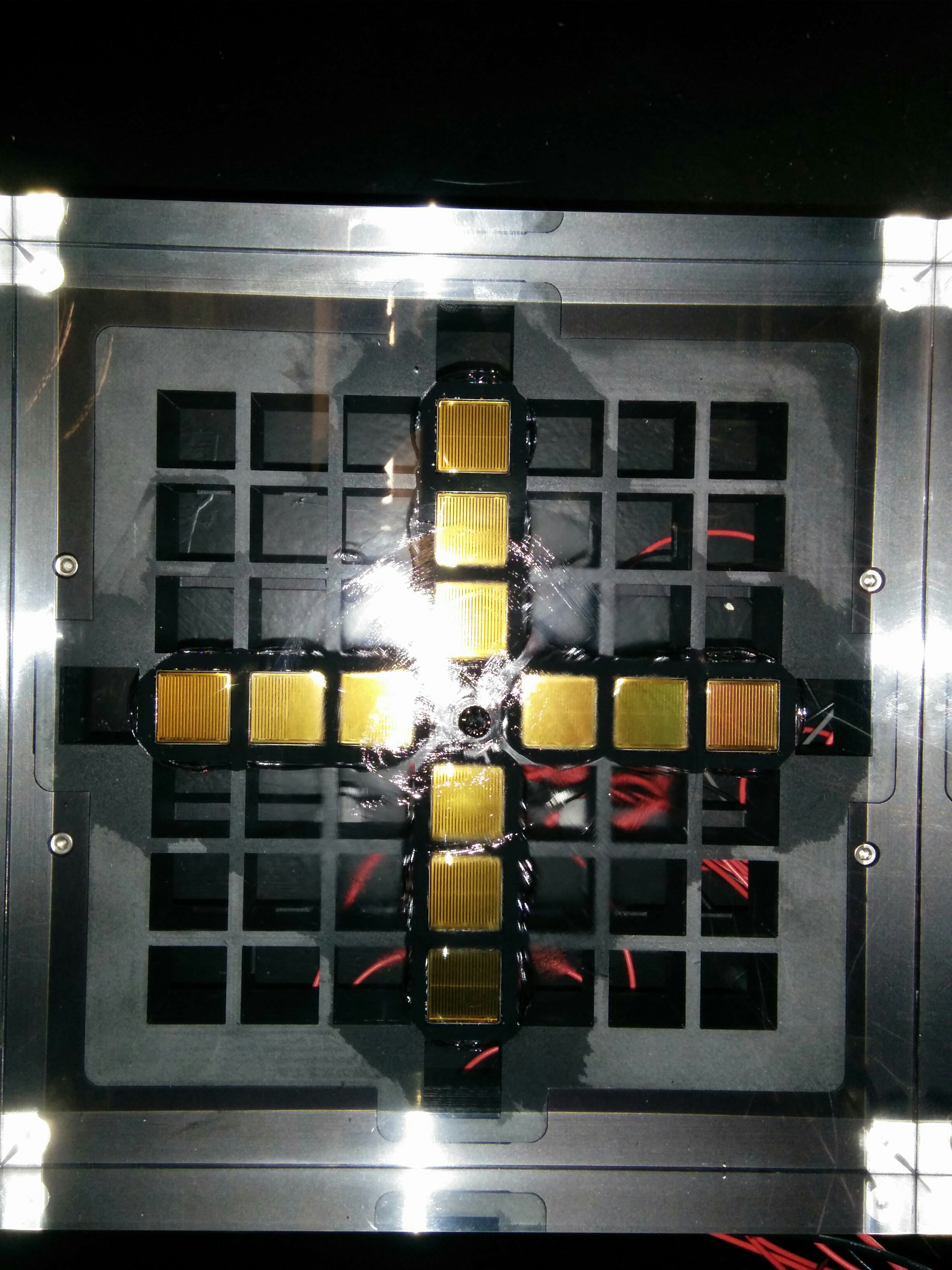 The CheSS benchtop experiment will demonstrate the separation of Cherenkov and scintillation light in different pure scintillator cocktels and in WbLS. In addition, it will characterize the new developed WbLS by measuring the light yield and scintillation time constants. The so-called timing setup will account on the first task, while the light setup will be in charge of the second.
The timing setup consists of a plane of several 1 inch PMTs distributed in a cross shape facing upwards to a small acrylic target filled with scintillator. Thanks to cosmic tags, we can trigger the adquisition when a vertical cosmic muon pass through the target creating both: a Cherenkov ring and isotropic scintillation light. These PMTs as well as our state-of-the-art electronics provide a great timing precision of 100ps making the time separation of the prompt Cherenkov and delayed scintillation lights possible.
The light setup is made up of 6 10 inches PMTs sourrounding the target and facing towards it, providing ~15% coverage of the light produced by the scintillation medium. The aim is collecting as much light as possible to perfectly understand the light yield and time characteristics of different scintillator cocktels, like WbLS.
Admixtures of linear-alkybencene (LAB) mixed with water at different loading levels (1%, 5%, 10% and pure LAB) provided by the Minfang Yeh group at Brookhaven are been tested and characterized at Berkeley.

Scintillator materials are very well known and broadly used in particle physics to detect and measure the energy of charged particles as they transform the deposited energy in visible photons. Despite they provide low energy threshold measurement, they are not very efficient in big detectors due to the poor optical properties such the attenuation and the scattering length. Moreover, Cherenkov light is also produced but it is push into the background due to the high light yield of the scintillation light. Then, it is very difficult to detect and to distinguish from the scintillation light.
The new scintillators water-like rather than oil-like are a mixture of small amounts of liquid scintillator in water. By changing the loaded fraction of scintillation, we obtain a medium with a custom light yield adapted to any specific situation. In addition, it provides water-like optical properties and the possibility of separating between scintillation and Cherenkov light, opening a new window of applications for optical detectors. 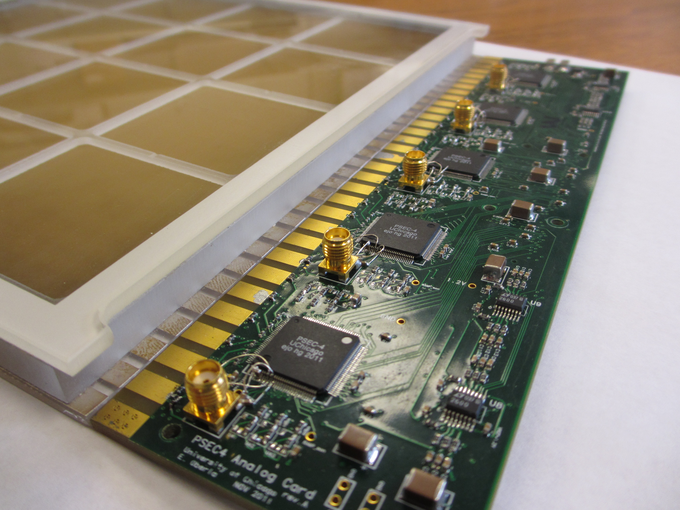 The Large Area Picosecond PhotoDetectors are the future generation of the photon detection. They are single photon counting devices with a very fast timing response that provide a superb timing and spacial resolution: ~10ps and ~1cm precision, respectively. All of that in a flat device of ~3cm thickness and ~30cm length. They are made under a stripped pattern to provide spatial resolution in one of the axis. When one of the strips sees light, it produces photons that travel to each of the ends where the electronic precisely monitor the timing and hence, it is possible to estimate where the hit took place by measuring the difference in time between both signals. This provides full XY pixelation. The principle is somehow similar to the time projection chambers (TPC) and this is why this devices are also known as optical TPCs.